There’s a saying that goes: Just as medical doctors judge the condition of a person’s heart by the pulse beating in the arm and not by words proceeding from the mouth, so too we may judge the thankfulness of people by their lives and not simply by their words. How blessed we are as we consider the gifts of God both for soul and body! Expressing ourselves with “O give thanks!” brings an important follow-up with our daily living. In thankfulness for God’s grace as shown in His Son’s work of saving us, and in gratitude for the food and necessities of life we enjoy daily, we pray: Take my life and let it be consecrated, Lord, to Thee.

Blessings in the name of our Savior, 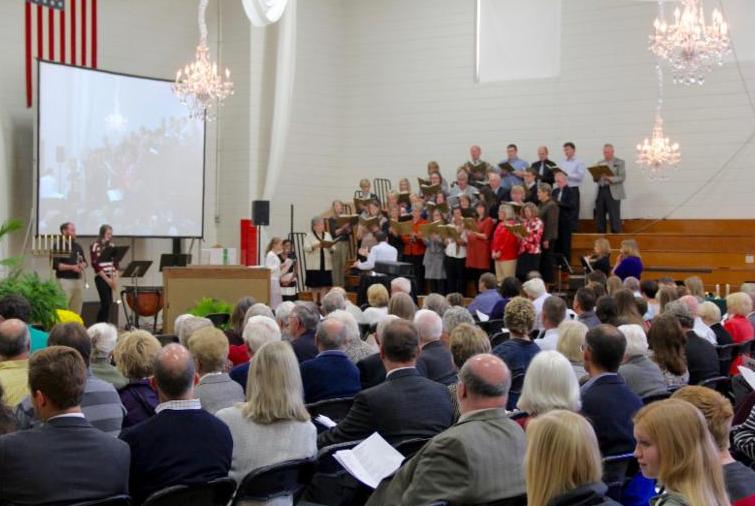 Praise God for 100 years of His grace at King of Grace Lutheran Church & School!

King of Grace in Golden Valley, Minnesota, celebrated its 100th anniversary on Sunday, October 9, 2016. The congregation’s history is tied in with that of two predecessor churches that combined years ago: Fairview of Minneapolis (1916) and Emmaus of Minneapolis (1926). The history parallels that of the ELS, since Fairview originated as a result of the same doctrinal controversy on election/conversion. Emphasizing the stand of Scripture that it is all a matter of God’s grace alone, the present day congregation chose its name. We thank God for the blessings showered over the many years on one of our synod’s largest churches.

Christ the King Lutheran Church in Bell Gardens, California, has been with the synod since 1972. Due to cultural and population changes over time the congregation, in recent years, has found itself struggling to stay open. Through communication with our Arizona-California Circuit Visitor, the Rev. Jay Webber, the Board for Home Outreach (BHO) conducted a sight selection study on the community of Bell Gardens and the surrounding area. It was determined that Bell Gardens, California, was a good location to begin a cross-cultural mission; as the population of Bell Gardens and the surrounding communities is over 96 percent Hispanic. The BHO requested that a candidate be assigned from last year’s seminary graduating class to serve as missionary to the Hispanics in Bell Gardens. Candidate of Theology Matthew Behmer was assigned as missionary. In preparation for his new call Pastor Elect Behmer, along with his wife Elizabeth, enrolled in an intensive language study program at Spanish Institute of Puebla located in Puebla, Mexico. The course is designed to help them become fluent in the Spanish language and differing dialects of the area. They have now completed their studies and will be arriving in their new community in mid-November. Pastor Elect Behmer with be ordained and commissioned on November 27, 2016. Please keep Pastor Behmer and his family in your prayers as he begins his mission work in Bell Gardens, California, and the surrounding area.

The Circuit 8 Women’s Mission Rally was held on September 24 at Immanuel Lutheran Church, Audubon, Minnesota. Pastor John Merseth preached the sermon. The text was Ephesians 4:3-5:2, with the theme: Be Imitators of God. The guest speaker was Claudia Ernst, wife of the Rev. Micah Ernst (Peace Lutheran in Jefferson City, Missouri). Her topic was “Mental Illness in the Christian Home”–how to recognize it, how to handle it, and where to find support. An update on ELS missions was provided by the Rev. Rodney Flohr of Cold Spring, Minnesota, who serves as secretary of the Board for Home Outreach. A wonderful lunch was served by the women of Immanuel Lutheran. Forty people were in attendance. 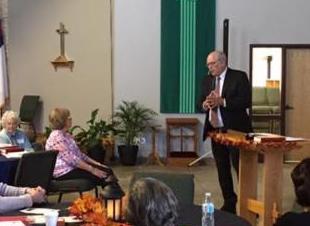 On Saturday, October 22, 2016, women from our congregations in ELS Circuit 9 gathered at Redeeming Grace in Rogers, Minnesota, for their annual fall mission rally. Pictured here is new Board for World Outreach administrator, the Rev. Thomas Heyn, providing an overview of our work.

Meetings with the CLC

At the 2016 convention, the ELS accepted the “Joint Statement on the Termination of Fellowship” as a presentation of the biblical doctrine. The statement was presented to the district conventions of the Wisconsin Evangelical Lutheran Synod (WELS) last summer and will be considered by the 2017 WELS convention. The Church of the Lutheran Confession (CLC) also considered the statement at its 2016 convention and directed it to the CLC pastoral conference for further study.

On Sunday, October 23, 2016, the Rev. Jesse DeDeyne was installed as pastor of our synod’s joint parish located in Hood River and The Dalles, Oregon. The parish continues to be served also by the Rev. Jesse Jacobsen, and the churches together operate Columbia Lutheran School.

As more of our ELS members become acquainted with our “Proclaim the Wonders God Has Done” thankoffering, the support has been adding up. Already our members have gathered nearly $200,000 in cash gifts and an additional $58,000 in promises. Thank you! Our thanks also go out to the pastors and church council members for presenting this offering to their membership. Gifts can be from all categories: cash, securities, gift annuities, bequests and beneficiary designations and/or IRA charitable rollovers. All such gifts help us carry out the important task of “… making disciples of all the nations.” Visit us at els.org/offering to learn more or to give online. You may also call: 507-469-9656.