Referencing Acts 2, this year’s synod convention essayist drew our attention to a “call for action.” In light of our synod-wide anniversary offering, Pastor Timothy Hartwig posed a thought-provoking question: “When Peter and the apostles proclaimed the truth that Jesus is the Messiah at Pentecost, those who heard were cut to the heart. They were convinced that they had crucified the very one for whom they were waiting. They believed and their faith caused them to ask, ‘Brothers, what should we do?’ It is a good question for us to ask. What should we do? We have considered two threads: Home missions and Christian giving. What action is our belief calling us to take?” … May God bless us in our efforts to use our resources to share the message of salvation in Christ with many more souls throughout our land!

The 99th Convention of the ELS

A Brief Review of the 2016 Synod Convention

Anniversary Thankoffering
A kick-off presentation was made during the 2016 Synod Convention for the Anniversary Thankoffering. As the committee reminds us, “In thankfulness and in honor of the 500th anniversary of the Reformation and the 100th anniversary of our synod we seek to Proclaim the Wonders God Has Done!” Every congregation has or will soon receive packets of information for members. You can watch the video and learn more online: http://www.els.org/offering/

The total contributed by the close of the convention or indicated as an intention to give was $182,865! In addition, we have $37,500 in deferred gifts for the offering in hand. In the future, deferred gifts will only be reported annually. The offering continues until December, 2018. 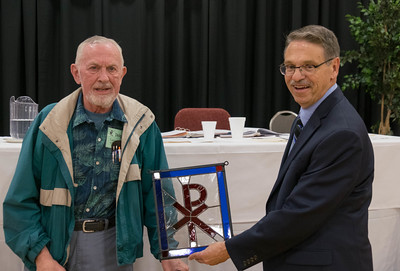 Leroy Meyer Honored
The convention took time to recognize Mr. Leroy Meyer for 50 years of service on the Board of Trustees. As a token of appreciation, President Moldstad presented Leroy with a stained glass Chi Rho, the logo of the ELS. The art piece was done by Mrs. Campbell, a member of Saved By Grace Lutheran in Gresham, Oregon.

Ordination
Candidate of Theology Joshua Mayer was ordained and installed at Redeeming Grace Lutheran Church in Rogers, Minnesota on June 26, 2016. Dr. Michael Smith preached the sermon and the Rev. Erwin Ekhoff served as liturgist and performed the rite of ordination. May God bless his faithful servant!

Lutheran Youth Association Convention
The LYA Convention dates are set for July 28-31, 2016, and the location is the University of Texas at Dallas. Please check out our ELS webpage for details: <styleclass=” style_MainLink” style=”font-family: Arial; color: #d51e49; text-decoration: none;”>http://www.els.org/lya16/