Dear Members and Friends of the ELS:

In just five months the level of anxiety has increased immensely. More is on the way. Will schools open this fall? Will the viral resurgance subside? Will more jobs be lost? Will peace and order be restored in our cities? Will people of our nation get beyond rancor and bitterness and begin showing love and respect for one another? Will we ever get back to the normal way we as congregations gathered for worship? Will all of these things take a toll on my health, both physically and spiritually? … Dr. John Donne, an English poet and theologian (1573-1631), once wrote: “If God does not withdraw his spiritual blessings, his grace, his patience; if I can call my suffering his doing, my ailing his action, –all this that is temporal is as a caterpillar who got into one corner of my garden, or as some mildew fallen on a mere acre of my corn: the body of all, the substance of all, is safe as long as the soul is safe.” Donne reminds us that, in the blessed work of our dear Lord Jesus, our redeemed sinful souls have safe haven. An interesting hymn of Donne’s appears in our Evangelical Lutheran Hymnary, “Wilt Thou Forgive That Sin” (#498). It carries the refrain that, since “God has done” what is necessary in forgiving our sins and promising heaven through faith in the Savior, you and I have reason to “fear no more.” May God help each of us see how he is ruling over all things for our eternal good! 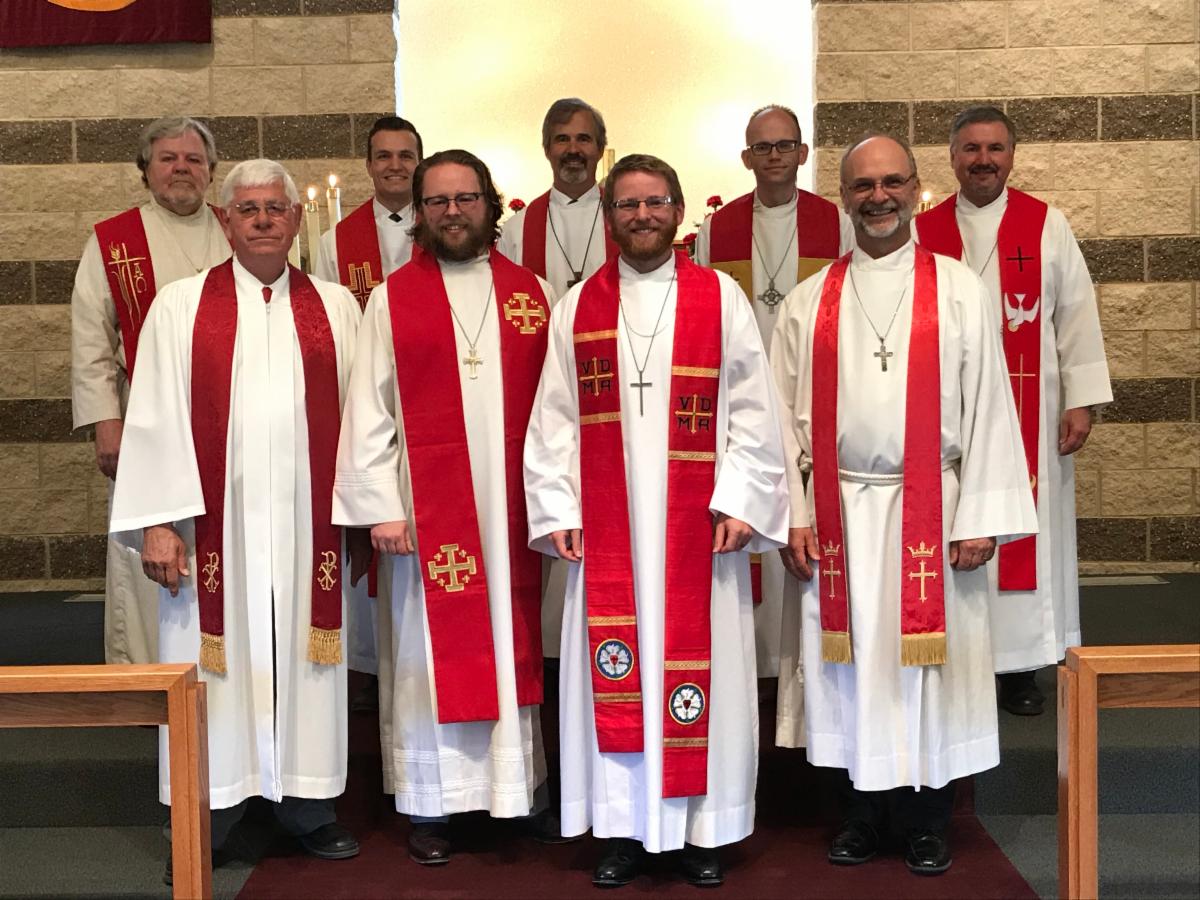 On Sunday, July 5, 2020, Candidate of Theology Jacob Kempfert was ordained and installed as pastor of Gloria Dei Lutheran in Saginaw, Michigan. The preacher for the occasion was Jacob’s brother, Rev. Ben Kempfert (WELS) of Waupaca, Wisconsin. Rev. Paul Schneider, the Circuit 3 Visitor, performed the rites, while Rev. Patrick Ernst served as liturgist. Other pastors present for the service were: Paul Zager, Jeff Luplow, Kurtis Freimuth, Paul Lange, and Dan Basel (Jacob’s father-in-law). We ask the Lord’s blessings upon Pastor Kempfert, his wife Anna, and their daughter Haddie, as he takes up his new charge. 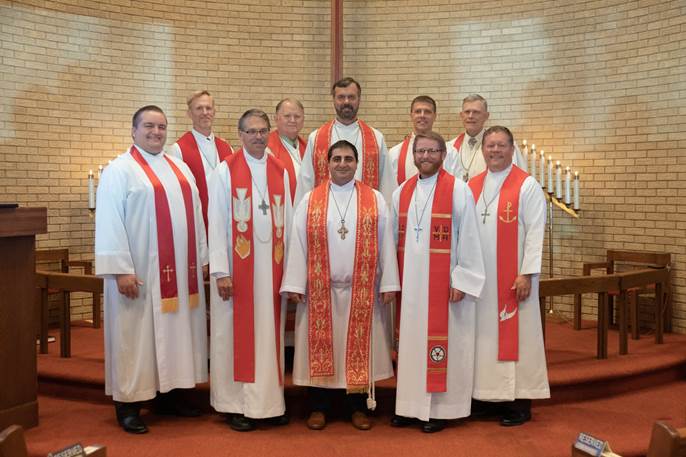 Candidate of Theology Karim Yaghleji was ordained and installed as missionary and pastor at St. Timothy Lutheran Church in Lombard, Illinois on Sunday, July 19, 2020. We ask the Lord’s blessings on Pastor Yaghleji’s work as co-pastor of the congregation and also serving as an Arabic-language missionary. Pastors pictured are, back row: Tim Hartwig, Larry Wentzlaff, David Thompson, Adam Gawel (WELS), Ted Gullixson; front row: Thomas Nicholson (WELS), John Moldstad, Karim Yaghleji, Jacob Kempfert, Jonathan Kehren (WELS). Karim’s wife Anna sang the Lord’s Prayer in Arabic at the afternoon service. Karim and Anna have two daughters: Amira and Raina. We are grateful for the cooperation between St. Timothy and the synod’s Board for Home Outreach in sponsoring this special ministry.

Dear friends,
Several weeks ago we were told of a need to help with salary support for the teachers at our two schools in Lima, Peru. We shared the need with you and your response has been overwhelming. We are sincerely grateful for your prayers and gifts. With your generous offerings that need has now been met. Thank you.

The Board for World Outreach continues to work on your behalf as we join our confessional Lutheran brothers and sisters around the world to carry on Christ’s work. May the Lord continue to bless you and us as we labor in his kingdom.

In Christ’s service,
Thomas A. Heyn
Administrator, ELS Board for World Outreach

We urge our readers to see pictures of summer installations of the vicars from our Bethany Lutheran Theological Seminary by going to facebook.com/BethanyLutheranTheologicalSeminary/ 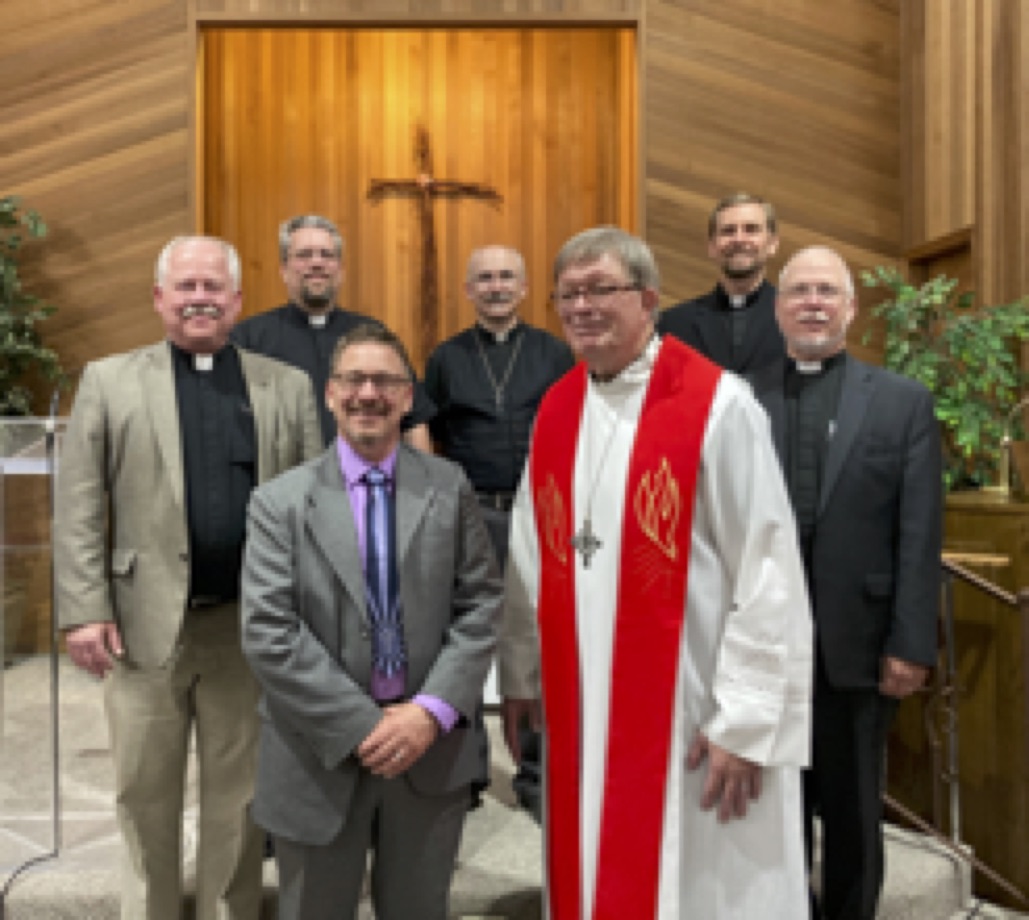 Vicar Roger Emmons was installed as vicar-in-mission at Grace Lutheran Church in Redmond, Oregon. The installation was conducted by his supervising pastor, James Ruppel. Other pastors of Circuit 12 attended as encouragement. Promotion of the vicar-in-mission program in southern Oregon has been an objective of the southern Oregon pastoral conference. The vicar-in-mission program is sponsored by the ELS Board for Home Outreach in conjunction with the congregation. The purpose of the program to prepare ministerial candidates for service in areas where new missions are established, and to equip them with the techniques, skills and experience to conduct outreach operations in a home mission setting.

The congregation where Vicar Emmons now serves is growing in the populated Redmond–Bend, Oregon, region. The church, located in Redmond, currently meets in a Seventh-Day-Adventist church building. There are many growth opportunities that will provide Vicar Emmons experience in a number of outreach methods and strategies—all intended to foster communication of the saving Gospel of Jesus Christ.

Vicar Emmons is now living in Redmond with his wife, Tammi. He is a twenty-year veteran of the United States Army, retiring as First Sergeant. He was awarded two bronze stars in connection with his service in the Middle East. He is to graduate from Bethany Lutheran Theological Seminary in the May 2021.

In 1946 the Evangelical Lutheran Synod established its own seminary to train pastors. During the current school year, we remember our seminary’s 75th anniversary and look to its future. The seminary anniversary fund will be used as an endowment to ensure the existence of our seminary for many years to come. Contributions can be sent directly to Bethany Lutheran Theological Seminary, 6 Browns Ct, Mankato MN 56001.

Pastor Ken Mellon has announced his retirement from the public ministry. His end date at Trinity Lutheran in West Bend, Wisconsin, will be July 31.

Pastor Mellon has announced his retirement and is moving to Mankato, Minnesota. He was serving as circuit visitor in circuit 5. The alternate visitor, Rev. Dan Hartwig, will take over as visitor. Rev. Bernt Tweit has accepted the appointment to serve as alternate visitor.

Mr. David Sparley has submitted his resignation from the Board for Home Outreach. The president has appointed Peter Salm of Hope Lutheran in West Jordan, Utah. This appointment will stand until next year’s synod convention.

August 4 – Board of Trustees

September 15 – Committee for Archives and History