It’s not about the numbers. That can be a hard thing for Christians to say and a harder thing to remember. We want to see the church grow. We want to share the gospel with as many as possible. When we see the numbers increase, it seems to give validation that our work in God’s kingdom has been effective. But ultimately our church work is not about attendance or membership numbers. It’s about ministering to souls so that their eternal future might be in heaven. In the words of an old saying, helping one person might not change the world, but it might change the world for that one person. And if we can change the world and eternity for one person, isn’t it all worth it?

Miguel passed away in July. The effects were felt throughout our neighborhood in San Angelo because everyone knew who Miguel was. When the COVID lockdowns hit sixteen months earlier, Miguel put out a lawn chair in his front yard and waved to the cars as they drove past his house. The cars would honk, and Miguel would wave in reply. It seemed like all day long he was out there. When I asked him why he did that, he said he just liked to make people happy.

I try to run a few days each week, and I would often run right past Miguel’s house. I would wave, but that was it for a while. I did wonder if Miguel had a church home. Figured he had probably been asked by others, but it couldn’t hurt to ask. So one day on my run when he was out waving at cars, I stopped to ask his name and let him know he’s making a lot of people happy. He asked what I do and when I told him, he said he’d take any literature my church could share. The next day I dropped off some information and invited him to join us. He said he would at some point. That was September of 2020.

The days and weeks stretched on. I kept running and he kept waving. Here and there I would stop to say “hi.” Here and there I would encourage him to check us out. This past Easter, seven months after I met him, provided a wonderful opportunity. Fliers were printed and I dropped one off with a handwritten note. A day or two later I had a chance to invite him personally. He said he would join us for Easter Sunday. But, as a pastor, you learn not to hold your breath every time a prospect makes that promise. 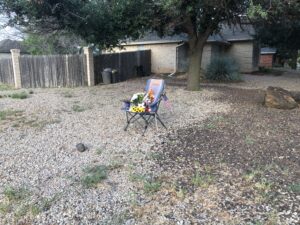 What a joy it was then to see his truck pull up on Easter and to celebrate the resurrection of our Savior with him! And Miguel continued coming. After a few weeks I stopped by to get to know him better and ask if he had any interest in starting a weekly Bible Class. He wanted to talk about it on his front lawn so I got to wave to cars with him as we chatted. More importantly, he very much wanted to start a Bible Study and that very afternoon we met for our first Bible Information Class together.

Over the two months or so of our weekly studies, we did not have a chance to discuss all of the finer points of Christianity, but we did have the opportunity to discuss salvation, creation, the fall into sin, Christ’s redemption, and the End Times. During our last lesson he mentioned that he wished that a place (like purgatory) really existed so he could make up for his past mistakes. I told him that I understood wanting to make up for past mistakes, but that nothing could make up for them. More importantly, I had the privilege of sharing the life-changing news that nothing needs to because Jesus paid for every sin on the cross when he died. The receipt is in his resurrection. Heaven is secured as our eternal home, not because of anything we have done, but because Jesus has done it all for us! We praise the Lord for the opportunity to share this wonderful news! What a joy to see the comfort it brings to people! 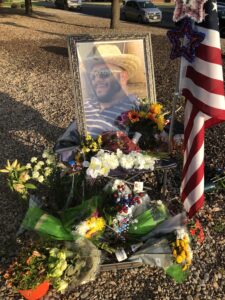 And then five days later Miguel suddenly passed away. Crazy thing is this is actually the second time in the last year that a prospect has died. That’s a difficult thing for a small mission congregation. We already deal with a good amount of turnover. As a military town we constantly have military members and families who are cycling through San Angelo. It’s difficult every time we have to say goodbye to those individuals and families.

But it’s not about the numbers. Bigger membership and attendance numbers would be great because that means that more people are hearing the gospel. But those numbers are in the Lord’s hands. As we read in Isaiah 55:10-11, “Just as the rain and the snow come down from the sky and do not return there unless they first water the earth, make it give birth, and cause it to sprout, so that it gives seed to the sower and bread to the eater, in the same way my word that goes out from my mouth will not return to me empty. Rather, it will accomplish whatever I please, and it will succeed in the purpose for which I sent it.”

What that means is that the Lord blesses the work of his Word in his own ways. We have no control over that. We can’t change hearts. What we can do is preach the Word. What we can do is share it with those around us. And by God’s grace, our congregation and I have had an opportunity to reach many more than just Miguel. But even when we might not have large numbers that are receptive or join our churches, we praise God for those who have, even if it’s only one. Because for that one or those few, the difference made is eternal. And that makes it all worth it.